Inspector Chulbul Pandey (Salman Khan) makes himself clear. His cops do as instructed. Pandey turns, only to find himself forlorn in a village ‘gully’. “Kya ho gaya hai police force ko,” he bolts in pursuit of the elusive dacoit.

The scene from ‘Dabangg’ pays tribute to Asrani’s legendary police officer from ‘Sholay’, and evokes peals of racuous laughter from the crowd. One of the many moments that bring an otherwise-ordinary movie alive. 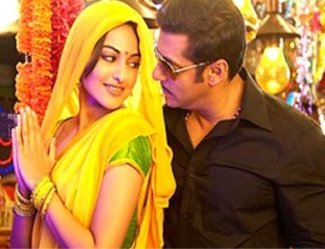 So we’ve Chulbul Pandey – a self-styled, corrupt -but- charming cop, who calls himself ‘Robin Hood’  – yeah, he steals from the rich and passes on some of the booty(not all, mind you) to the needy. Like a Rs 1 Lakh compensation to a constable injured in a (fake) encounter. Despite his charming self, Chulbul has enemies all over the place. He not only has  to patch up with his step father (played by Vinod Khanna), step brother Makhhi (Arbaaz Khan), but also woo his sweetheart Rajo (Sonakshi Sinha) – to whom his charm falls flat. Smalltime-politician -cum- goon Chhedi Singh (Sonu Sood) plays Pandey’s nemesis and pits the brothers against each other. Our ‘Robin Hood’ must fight all the odds in question.

‘Dabangg’ reminds of you ‘Quick Gun Murugun’, or at least  its comic-like styling. That’s the best part of the movie – at some point in time, you feel ‘Pandey’ is a superhero, with all his ‘superhuman’ powers. Abhinav Kashyap takes deviation from his brother’s (Anurag Kashyap, ‘Dev D’ fame) school of cinema – he’s lifted lavishly from Tamil movies, at least the stunts. Stunt-choreography by ace-Telugu-stuntman S. Vijay, only adds fuel to the fire. Coupled with bullet-time nee ‘slow motion’ (think Matrix), some stunts stun you (literally), while others fall flat. The opening sequence does justice, however and sets the tone to the movie. You also find references to those ‘70s potboilers featuring the ‘angry young man’ – epitomized in ‘Dabangg’ by Salman’s character.

Salman Khan emerges as the clear winner with the movie. No, he still can’t cry on-screen, and he still has a long way to go in terms of acting skills. But he’s portrayed Chulbul’s role with elan. Seamlessly marrying seriousness with smiles, he charms you – bringing forth some of the best moments in the movie. Like his dance to a henchman’s ringtone, in the middle of a stunt-sequence. He promptly reminds the henchman “Acha tone hai. Forward karna.” The movie brings out the best of Salman – which makes Dabangg a must-watch for all fans of the actor. Sonakshi sparkles, and makes her presence felt with an amazing debut. Sonu Sood is efficient as the menacing villain. But brilliant actors like Om Puri and Mahie Gill are wasted with side-roles.

That said, the biggest defect of the movie is its plot – which is behest with flaws. It’s hackneyed for one. Sibling rivalry is so yesterday. The screenplay is uneven and prolongs the movie. Plot holes and loose ends are galore – reasons behind the rivalry between Chulbul and his stepfather are not justified. And we don’t see a lot of ‘Robin Hood’ activity from Chulbul – he’s just another corrupt cop who hoards a safe-full of money. Apart from the love-track between Sonakshi and Salman, all sub-plots falter.

This movie is not for the intellectual. Leave your brains at home, or at least at the doorstep of your theatre, before you watch the movie. The matrix-style stunts make you pull your hair out of exasperation. Watch out for the final face-off between Salman and Sonu. Salman, badly hurt from a stab flexes his muscles. Lo and behold, his shirt gets shred and flies away – leaving you with a glimpse of the ‘steel body’.

If you are sporting enough to guffaw and forget scenes like these, good for you.

At some point in time, you wonder whether the movie is a spoof. Well, it’s not – it does have a, er, ‘serious’ story. But the profusion of fun moments make you think otherwise; and the end, you come out disappointed.

‘Dabangg’ is not a bad movie. It’s fun, you ought to watch it sans expectations. Don’t get hyped up by the promos. Expect the worst, and you’d have a fun-filled two hours, five minutes. Watch it if you’re into slapstick or if you’ve had a rough day.